Cold Higham is believed to be the highest village above sea level in Northamptonshire.

Transcribed from A Topographical Dictionary of England, by Samuel Lewis, 7th edition, published in 1848:

HIGHAM, COLD (St. Luke) a parish, in the union and hundred of Towcester, S. division of the county of Northampton, 3½ miles (N. W. by N.) from Towcester, on the road to Daventry; containing, with the hamlet of Grimscote, 388 inhabitants. It comprises 1699a. 32p.; of which three-fourths are arable, and the rest pasture, with about 30 acres of wood; the surface is gently undulated, and the soil chiefly a reddish, sandy loam. From the elevated situation of the parish the views are extensive, embracing the battle-field of Naseby, eighteen miles distant. The living is a rectory, valued in the king's books at £10; net income, £407, with a glebe-house; patron, the Earl of Pomfret. The tithes were commuted for land in 1812. Of the church, the nave and chancel are in the decorated style, and built in the 14th century; the tower is early English: in a small chapel is a monument to a Knight Templar. There are a Sunday school, and a clothing club. The parish is bounded on the north-east by the Roman Watlingstreet.

In 1870-72, John Marius Wilson's Imperial Gazetteer of England and Wales described Cold Higham like this:

"COLD-HIGHAM, a parish in Towcester district, Northampton; 4 miles NNW of Towcester r. station, and 5 W of Blisworth. It includes the hamlet of Grimscote, and part of Fosters-Booth and Potcote; and its post town is Pattishall, under Towcester. Acres, 1, 660. Real property, £2, 767. Pop., 349. Houses, 83. The property is divided among a few. The living is a rectory in the diocese of Peterborough. Value, £467. Patron, J. B. Howes, Esq. The church is good."

The 1894-5 Comprehensive Gazetteer of England and Wales had this to say:

Cold-Higham, a parish in Northamptonshire, 3 ¼ miles NNW of Towcester station on the L. & N.W.R, and 5 W of Blisworth. It includes the hamlet of Grimscote and part of Fosters-Booth, and its post town is Towcester; money order and telegraph office, Towcester. Acreage, 1730 ; population, 330. The living is a rectory in the diocese of Peterborough; net yearly value, £300. The church, an ancient building of stone in the Norman style, contains an altar tomb with an effigy in oak of a knight in plate armour and surcoat, representing Sir John de Patteshull, who died in 1350. Ironstone is found.

The Kelly's Directory of Bedfordshire, Huntingdonshire and Northamptonshire:

Cold Higham, so called from its exposed and elevated situation, is named "Hecham" and "Hecham Parva" or "Little Higham" in early records, and "Heca" in Domesday Book; together with Grimscote and part of Foster's Booth it constitutes a parish, about a quarter of a mile west of the old London and Liverpool coach road, 4 miles north from Towcester station on the Stratford-on-Avon and Midland Junction railway, 5 west from the Blisworth station on the main line of the London and North Western railway and 7 south-west from Northampton, in the Southern division of the county, hundred, petty sessional division, union and county court district of Towcester, rural deanery of Brackley (second portion), archdeaconry of Northampton and diocese of Peterborough.

Some details of the Parish's history from Roman times, through medieval and more modern times can be seen on the British History Online website.

The church dates from the 13th (tower) and 14th (main building) centuries. It is likely that there was an earlier church on the site.

The church was Listed (Grade II) on 17 May 1960 (English Heritage Building ID 234664). Further information about the church is available on the British Listed Buildings website. 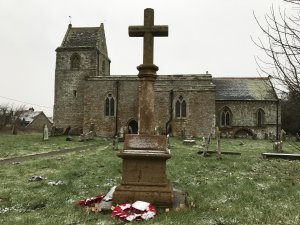 The history of the War Memorial is currently being researched. It will be added shortly.

These are the names of those who fell in the two World Wars, and who are remembered on the War Memorial.

More information about each individual can be found by clicking on the name (if there is no link, then that person's information has yet to be added.)