"Carols in the Hall"

I am sending this message out on behalf of Northamptonshire Police, Safer Roads.
As you may already be aware, E-Scooters have become increasingly more popular over the past few months. At this time, personal bought scooters are not deemed as road legal and cannot be used in any public area in Northamptonshire and across the UK.

There has been a report of criminal damage to a garage on Fosters Booth Road, Pattishall whereby offender(s) have forced entry but nothing was taken.

Did you see or hear anything in the area that was suspicious?

Do you have CCTV or Dashcam footage that may have captured any sightings of the offenders or any possible vehicle. 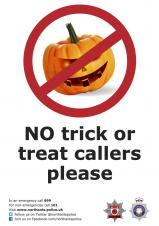 Northants Police have asked us to publicise their message about staying safe this Halloween.

Their newsletter is downloadable from here, and there is a 'No Trick or Treats' poster also available. More posters are available from their web site.

There has been a report of a burglary to an outbuilding on School Road, Pattishall.

Did you see or hear anything in the area that was suspicious?

Do you have CCTV or Dashcam footage that may have captured any sightings of the offenders or any possible vehicle.

If you noticed anything suspicious in the area or have... Read More » 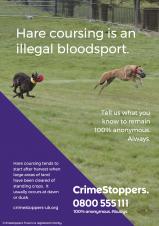 On Monday 24 August, in partnership with the Office of Police Fire and Crime Commissioner, Crimestoppers launched a campaign about Hare Coursing.

The campaign highlights suspicious activity to be aware of and encourages people to report information either to the Police or to Crimestoppers anonymously on 0800 555 111. 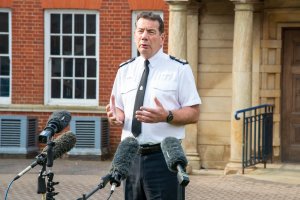 Northamptonshire Police is preparing to up its enforcement activity against those who continue to flout the COVID-19 restrictions in the county.

The Force has not issued any fines for non-compliance so far, preferring to adopt an approach which seeks to educate people, engage with them and explain how their behaviour could affect others.

While the majority of the public have been fantastic in staying... Read More »

These are the words of a senior police officer at Northamptonshire Police as no COVID-19-related fines were issued by police officers across the county over the weekend period.

Three men have been sentenced for sheep butchery offences as part of Operation Stock.

Robert Iordan, aged 23, and Florin Nutu, aged 36, both of Birmingham, pleaded guilty to conspiracy to steal in relation to the slaughter and illegal butchery of sheep and lambs, at Northampton Crown Court on Friday, February 14. Last week they were sentenced to four years and four months in prison each.

Please see a statement below from the Chief Constable of Northamptonshire Police on Covid-19:

Chief Constable Nick Adderley, said: "We are all aware we are now living in unprecedented times and, from today, every one of us is being asked to step up and play a crucial role in the battle against Covid-19. All that is requested of you is that you follow Government advice - stay at home, save lives and... Read More »

There has been a report of a burglary to a garage on Litchborough Rd, Grimscote whereby suspect(s) have taken an orange ride on lawn mower. Suspect(s) must have used a vehicle or trailer that is able to transport the mower away.

Did you see or hear anything in the area that was suspicious?... Read More »